The government of North Carolina is divided into three branches: executive, legislative, and judicial. These consist of the Council of State (led by the Governor), the bicameral legislature (called the General Assembly), and the state court system (headed by the North Carolina Supreme Court). The Constitution of North Carolina delineates the structure and function of the state government.[1][2][3] 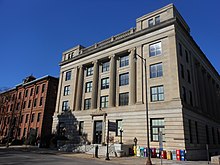 The Department of Agriculture Building in Raleigh

The nine North Carolina Cabinet departments, headed by department secretaries, plus the Department of Administration, are appointed by the Governor are as follows:[4] 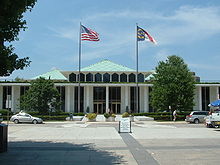 The first North Carolina General Assembly was convened on April 7, 1777 in New Bern, North Carolina. It consisted of a Senate, which had one member from each of 37 counties (regardless of population) and Washington District (became part of Tennessee in 1796), and a House of Commons, which had two members representing each county, plus one each from six districts or boroughs (Edenton, Halifax, Hillsborough, New Bern, Salisbury, and Wilmington). Only land-owning (100 acres for the House of Commons, 300 acres (1.2 km2) for the Senate), Protestant men could serve. The first legislature elected the Governor, Richard Caswell. The legislature was more powerful compared to the executive branch in the early government.[1] 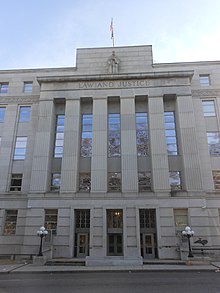 North Carolina’s current judicial system was created in the 1960s after significant consolidation and reform.[13] The judicial system derives its authority from Article IV of the North Carolina Constitution.[3] The state court system is led by the Supreme Court of North Carolina, the state supreme court, which consists of seven justices. The North Carolina Court of Appeals is the state’s intermediate appellate court and consists of fifteen judges who rule in rotating panels of three. Together, the Supreme Court and Court of Appeals constitute the appellate division of the court system.[14] 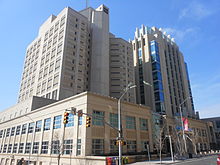 The District Court is a court of limited jurisdiction. It has original jurisdiction over family law matters (divorce, child custody, child support); civil claims involving less than $10,000; criminal cases involving misdemeanors and lesser infractions; and juvenile cases involving children under the age of 16 who are delinquent and children under the age of 18 who are undisciplined, dependent, neglected, or abused. Magistrates of the District Court may accept guilty pleas for minor misdemeanors, accept guilty pleas for traffic violations, and accept waivers of trial for worthless check and other charges. In civil cases, the magistrate is authorized to try small claims involving up to $5,000 including landlord-tenant and eviction cases. Magistrates also perform civil marriages. District Court only conducts bench trials, with no jury.

Local governments in North Carolina primarily consist of counties, cities, and towns.[15] North Carolina has 100 counties and more than 500 municipalities. Municipalities are only able to exercise the authority that the General Assembly explicitly gives them since

The General Assembly’s authority to create local governments comes from Article VII of the Constitution of North Carolina.[3]

County governments in North Carolina include the following officials:[15]

The 2019 elected ten-member Council of State of North Carolina is composed of:

OnAir membership is required.  The lead Moderator for the discussions is Scott Joy.
We encourage civil, honest, and safe discourse.  See Terms of Service for curation guidelines.

This is an open discussion on the contents of this post.